Deprecated: mysql_pconnect(): The mysql extension is deprecated and will be removed in the future: use mysqli or PDO instead in /home/portuga2/public_html/connections/config.php on line 27
 Óbidos - Portugal B'side

Trivia: Óbidos is known as "Queens Village" because in the past was tradition the Portuguese kings offer this Village as a gift to the Queens

Some points of interest: Village and Castle, Óbidos Lagoon 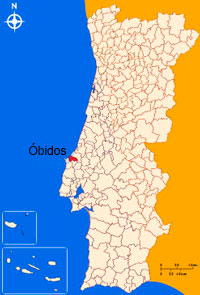 Óbidos is located in the central coast of Portugal, 80km (50 miles) from Lisbon. Its picturesque village lies within the castle walls, with houses typically whitewashed with blue and yellow bars on the facades adorned with bougainvillea and honeysuckle. With a vast historical and cultural heritage, the streets fill up with churches and old houses with the blue sea and the green of the fields like a background landscape.

Its location next to the sea allowed these lands to be inhabited since very early ages, confirmed by found remains dating back to the Paleolithic. Followed by other people like the Celtiberos, Phoenicians, Romans, Visigoths and Moors. It was during this period of Muslim domination, which lasted more than 500 years that began the construction of the castle of Óbidos. In 11th January, 1148, after eight months of siege, the first King of Portugal D. Afonso Henriques takes Óbidos from the Moors. The land was donated to the Templar that built at Leiria region a defensive pentagon composed by: fortification of Óbidos, Alcobaça Monastery (built by Cistercian), Monastery of Batalha, city of Tomar (Templar City) and Castle of Almourol. In 1282, King Dinis offers the castle of Óbidos as a gift to his wife Queen Santa Isabel, and Óbidos starts a long tradition of being part of the dowry of all queens until 1834, and because of that the city is known as "Queens Village". With the 1755 earthquake the city was badly damaged, being rebuilt over the years and today becoming one of the country's main tourist destination.

The village host many cultural and artistic events that happen every year, leaving the narrow cobbled streets and the walls of the castle full of visitors. Within the walls don’t miss the traditional crafts stores were you can try the typical Ginjinha of Óbidos (a cherry liquor) in a chocolate cup.