Deprecated: mysql_pconnect(): The mysql extension is deprecated and will be removed in the future: use mysqli or PDO instead in /home/portuga2/public_html/connections/config.php on line 27
 Nazaré - Portugal B'side

Trivia: Nazaré villa homes the biggest waves surfed in history. Garrett McNamara surfed in 2011 a wave of 23.77 meters (78 ft) in the Norte beach, beating the record for the largest wave ever surfed

Some points of interest: Sanctuary of Our Lady of Nazaré, St. Michael Archangel Fort, Nazaré Funicular 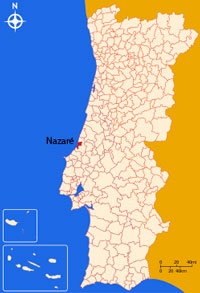 Nazaré is a place with many tourists for various reasons, whether religious, gastronomic or even some less conventional. In winter is the stage of the biggest waves ever surfed worldwide due to a fault in the ocean bottom, that extends itself for more than 200km and that channels the force of the waves against the majestic cliffs. On 1st November, 2011, McNamara hit for the first time the world record of the largest wave surfed in the Norte beach, with a record certified by Guinness World Records.

About Nazaré village is told the tale of a man saved from falling in the abysm because of his prayers to Our Lady of Nazaré. A figure of Our Lady had once been brought from Nazareth, in Palestine, for this location and placed in a cave on the edge of an abysm. This man knew the figure and venerated it. One day he was hunting on horseback at this location, chasing a deer that suddenly fell from the abyss. Recognizing the place, he appealed for the aid of Our Lady and the horse miraculously stopped before the abyss, like he was nailed to the ground. At that location and after the miracle, the man ordered the construction of Capela das Memórias (Memory Chapel). The name Nazaré comes from that figure of Our Lady of Nazareth who is still at the Sanctuary of Our Lady of Nazaré.

This town built its history based on their fishing activity. This is reflected in its typical gastronomy that brings together the various fish and shellfish. The costumes used in ancient times persist and today you can still see men and women using them like the traditional seven skirts costume. Do not miss the opportunity to experience this joyful village with magnificent views and many hidden treasures.