Deprecated: mysql_pconnect(): The mysql extension is deprecated and will be removed in the future: use mysqli or PDO instead in /home/portuga2/public_html/connections/config.php on line 27
 Aveiro - Portugal B'side

Trivia: Due to the existence of numerous palmipeds birds that populate this lagoon area in Roman period, the first name of this place was Aviarium. 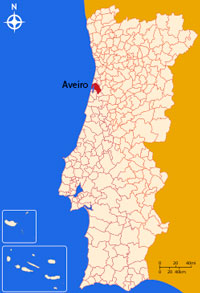 Aveiro city is located about 70km (44 miles) south of the Oporto city, Vouga River mouth, which forms the Aveiro Lagoon. It's an important urban, port, rail and university center, dubbed by many as the Art Nouveau capital in Portugal.

The first traces of the city date back to the Paleolithic period, intensifying in the Neolithic and later in the Roman period. The oldest and most predominant local productive activities are associated with the city coastal location. The 16th century was a great era of prosperity in Aveiro due to the great development of the salt industry, agriculture and fishing, which raised the location to city by charter in 1515, granted by King Emmanuel I. However the strong storms in 1575 completely destroyed the deep communication channel between the estuary and the sea, ceasing the entire maritime trade, fishing and salt activity. Only in the 19th century the Barra Nova would be built, with an opening to Ocean in 1808, reconstructing the local subsistence source.

The city is formed by multiple channels where the estuary intertwines with the land, receiving various types of typical boats such as the moliceiros, the mercantel, the bateiras murtoseiras and the bateiras erveira. Aveiro is known as the "Portugal Venice" and is one of the most enchanting destinations in the country, where everything comes together perfectly to form an idyllic setting - the colorful moliceiros, the pastel art nouveau buildings, the peaceful urban atmosphere. Also the handcraft has its role, particularly in ceramics. The region produces cereals, fruits, vegetables and mostly wines from the wine region of Bairrada. The salt extraction of sea remains a tradition. The beaches, water sports and spas are also attractive to tourism, very strong in the region. Come and meet Aveiro and live remote times in a very modern way.