Deprecated: mysql_pconnect(): The mysql extension is deprecated and will be removed in the future: use mysqli or PDO instead in /home/portuga2/public_html/connections/config.php on line 27
 Coimbra - Portugal B'side

Trivia: The University of Coimbra, one of the oldest in Europe, was declared a World Heritage Site in 2013 by UNESCO. 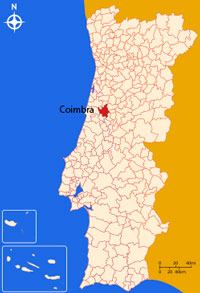 Coimbra is one of the most important cities of Portugal, due to various factors such as the strong implementation of industries, the great religious and historical relevance, the infrastructures, the location in the center of the country and world references in terms of Health and Education. The human presence in the region is from a remote time, with traces of occupation of various peoples including the Celts, Romans, Visigoths and Moors. In 1064, Fernando Magno conquered the land from the Moors, in 1139 the first king of Portugal, D. Afonso Henriques turns Coimbra in the Kingdom capital, a status it retains until 1260. The city, due to its prime location along the Mondego River, was an important trading center with direct fluvial connection to the sea port of Figueira da Foz. With the French invasion and the liberal struggles of the first half of the 19th century, Coimbra suffered a devastating period that only recovered in the second half of the century with the introduction of the electric telegraph and the inauguration of the railway.

Coimbra was the National Capital of Culture in 2003 and is one of the oldest cities of Portugal, former capital of the kingdom. Also its University, founded in 1290, is full of history and wealth, and was the first of Portuguese language and one of the most ancient in Europe, declared an UNESCO World Heritage Site in 2013. Coimbra is a very complete city filled with cultural, historical, architectural, artistic and social heritage. Every year countless visitors goes to Coimbra to watch the animated academic celebrations, where thousands of students proudly parade their black capes in the city streets, singing folk songs and filling the streets with the sound of the guitars that accompany the fados. Come inherit all this cultural and historic value in the sound of Coimbra fado and appreciate the local pottery with an academic spirit, always accompanied by Mondego River and the most ancestral pastry gastronomy.