Deprecated: mysql_pconnect(): The mysql extension is deprecated and will be removed in the future: use mysqli or PDO instead in /home/portuga2/public_html/connections/config.php on line 27
 Sagres - Portugal B'side

Trivia: Sagres played a major role in the Portuguese Discoveries as a starting point, place of study and development of navigation methods and ship improving

Some points of interest: Fortress of Sagres, Fortress and Lighthouse of Cape St. Vincent. 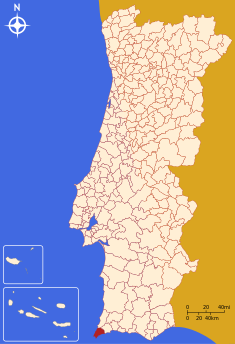 Sagres town, in the Vila do Bispo municipality, is located in the extreme southwest of the Algarve region. Known as Finis Terrae, it was thought that nothing existed beyond its imposing cliffs that determined the end of the earth and the beginning of the unknown, of myths. It is believed that it was a place of intense sacredness, evidenced by the large number of Neolithic menhirs that exist there. There are ancient reports that because it was so inhospitable it was considered a territory frequented by gods, and because of that forbidden the human presence at night. Later on, the location was used for the study of navigation methods and astrology, having been a major point of departure for the Portuguese Discoveries. The last port which the navigators from Levant could appeal before leaving for the unknown was in Sagres. The need to guard and protect the seas is reflected in the markedly different forts and lookout points present on the Ponta de Sagres and Cape St. Vincent, founded to support navigation and fishing.

Nowadays Sagres has unique natural conditions, hiding among the various cliffs many crystal blue water deserted beaches, facing different directions due to the geography of the place, which enables almost always find a beach without wind or with the desired wave. This idyllic setting offers excellent conditions for observing fauna and flora in this unique location. Water activities are also prevalent, enabling closer or more distant land experiences like watch dolphins. Sagres is a place that attracts visitors due to the variety of suggestive scenarios that merges the rough, the smooth, the beautiful and the wild, as if it was a territory that has just been discovered, all of it carved by the Atlantic winds and waves, inviting its exploration. Fall in love with this place, exploring the various local traditions, such as handicrafts and gastronomy.