Deprecated: mysql_pconnect(): The mysql extension is deprecated and will be removed in the future: use mysqli or PDO instead in /home/portuga2/public_html/connections/config.php on line 27
 Tomar - Portugal B'side

Trivia: Templar City that born within the walls that protected the inhabitants from the Muslim armies attacks, during the Christian re-conquest started in the 8th century.

Some points of interest: Convento de Cristo, Castle of Tomar, Church of St. John the Baptist, Aqueduct of Pegões 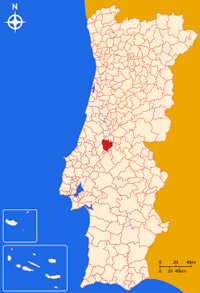 Situated on the beautiful banks of the Nabão River, Tomar is a historic city in Portugal with traces of human occupation since the Paleolithic period. In 1147 the first king of Portugal, Afonso Henriques, conquers the city from the Moors and donates it as a fief to the Knights Templar in 1159. In 1160 the Grand Master of this Order, Dom Gualdim Pais, orders the beginning of the construction of the Castle and Convent that would serve as headquarters of the Knights Templar and later of their successors the Order of Christ. The Convent of Christ, one of the most important works of the Renaissance in Portugal that still retains memories and traces of this occupation, was classified in 1983 by UNESCO as World Heritage. In the 15th century Infante D. Henrique ordered the diverting of the Nabão River in order to drain the swamps to prevent flooding, benefiting the Tomar city of a significant size increase. The new streets were designed according to its guidelines, in the geometric form they appear even today. In 1492, with the expulsion of the Jews from the Spanish kingdom, the city receives numerous professionals, artisans and merchants refugees that enabled a strong development throughout the region, essential for the success of the Portuguese Discoveries. Later, when the expulsion of the Jews from Portuguese territory happened, Tomar city loses much of its economic dynamism. During the 18th century regains its strength and vitality with the opening of the Royal Factory and its innovative hydraulic mechanism, by the Marquis of Pombal, and later the Spinning Factory by Jacome Ratton in the Queen Mary I rein.

It is a city internationally known for its historic beauty, culture and hospitality of its inhabitants. The architectural relics, historical diversity, the complete cultural guide, the beautiful city gardens or the banks of Nabão River are some of the possibilities that delight the visitors who choose this city for a cultural and relaxing holiday. Every four years in the beginning of July takes place in Tomar the famous Festa dos Tabuleiros (Festival of the Trays) that animates the streets for three days, attracting hundreds of tourists from all corners of the world.