Deprecated: mysql_pconnect(): The mysql extension is deprecated and will be removed in the future: use mysqli or PDO instead in /home/portuga2/public_html/connections/config.php on line 27
 Azores - Portugal B'side

Autonomous Region of the Azores

Trivia: The Pico Mountain, located on the island of Pico, is the highest mountain in Portugal reaching 2,351 meters above sea level. 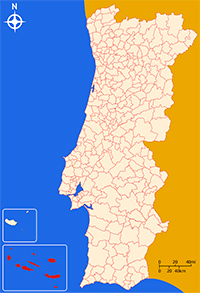 Azores is an archipelago located about 760 miles from Portugal, made up of three groups of volcanic islands. Altogether comprises nine islands distributed between the Eastern group, formed by the islands of Santa Maria and São Miguel, the Central group represented by the islands of Terceira, Pico, Faial, Graciosa and São Jorge and the Western group with the islands of Corvo and Flores . On Santa Maria Island you can explore the warm beaches with white sands or their vineyards that spreads in an amphitheater shape in the steep slopes. On São Miguel Island the great Sete Cidades and Fogo Lagoons are enchanting, and the constant volcanic activity allows experiencing hot baths in thermal waters or enjoy the famous Cozido das Furnas slowly cooked inside the earth. The central islands group, regularly visited by groups of whales and dolphins, deserves to be pointed the splendid history of Angra do Heroismo city located in Terceira Island, the vivid blue of the hydrangeas and colorful marina on Faial island, the Pico island and its mountain that rises from the sea and are loaded with vineyards planted on the black lava fields, the beautiful fajãs (rocky outcrops on the coast) and the very well-known and appreciated cheese from the São Jorge Island, and finally the grace of Graciosa Island with its green fields covered with vineyards in contrast to its peculiar windmills. In the West don’t miss the beautiful island of Flores with its stunning natural waterfalls and lakes carved by volcanoes, or the small Corvo Island with its beautiful large crater which attracts several species of birds coming not only from Europe but also from the US.

The Azores, discovered by the Portuguese around 1427, belongs to Portugal but are now considered as an autonomous region. This archipelago of volcanic origin, it’s a great place for observing volcanic phenomena in Portugal. Also its rugged landscape and low urbanization in most islands, makes it possible to discover fauna and flora of rare beauty. Don’t miss this wonderful pearl of the Atlantic where Mother Nature has created a land full of natural beauty and ready to be explored.