Deprecated: mysql_pconnect(): The mysql extension is deprecated and will be removed in the future: use mysqli or PDO instead in /home/portuga2/public_html/connections/config.php on line 27
 Sintra - Portugal B'side

Trivia: It is said that Sintra Mountain is hollow inside, formed by several large tunnels and galleries built by the Moors and later by the Templar, about eight centuries ago. 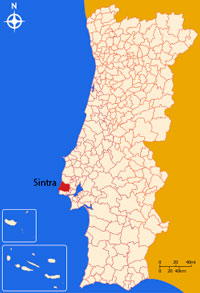 Sintra, 30 km (19 miles) from Lisbon, is undoubtedly a Portugal paradise that houses the Cultural Landscape of Sintra since 1995 declared as World Heritage Site by UNESCO. The unique characteristics of the region meant that UNESCO had to create a specific category for classifying it, the "cultural landscape", considering not only the natural wealth as all the historical heritage of the village and mountains.

Since ancient times the region was the chosen location for several people who passed through the Iberian Peninsula and here left traces of their presence. In the 12th century the Castle of the Moors was conquered by the first King of Portugal D. Afonso Henriques and the current Palácio da Vila, built on the remains of an Arabian palace, served as a residence for the royal family.

The name Sintra derives from the word cynthia, moon symbol in Celtic mythology. It is a magical place where the mountain abundant in mysteries and legends ends imposingly over the ocean. In Roman times it was known as Mons Lunae or Moon Hill, and sacrifices were there performed in its honor. This mystical strength with almost supernatural contours surrounds the Sintra Mountain in a mysterious paradigm that endures until this day. From ancient times the poetic and romantic atmosphere of Sintra fascinates many artists around the world who come here for inspiration for their works. Shrouded in a characteristic mist, Sintra Mountain attracts annually many tourists, not only for its proximity to Lisbon, but for its magnificent natural beauty that welcomes palaces and mansions, noble farmhouses, castles, mysterious monasteries, without forgetting its historic village.

Stroll through the town center and enjoy centuries of culture that still survive in its streets, get to know its historical palaces and castles that are hidden in the dense forest, or go down to the beaches to enjoy a revitalizing sunset.