Deprecated: mysql_pconnect(): The mysql extension is deprecated and will be removed in the future: use mysqli or PDO instead in /home/portuga2/public_html/connections/config.php on line 27
 Portalegre - Portugal B'side

Trivia: Portalegre was long known as the "city of seven convents" because of the importance Portalegre convents had in the past. 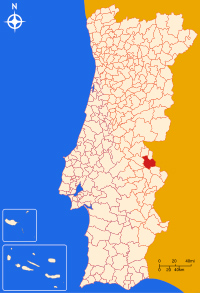 Through the vast Alentejo plains, in the heart of the Serra de São Mamede Natural Park, is Portalegre. A serene hinterland destination with impressive unique landscape, formed by the meandering fields of the Alto Alentejo sub-region and the dense and lush forests that characterize the north of the country. The numerous Roman ruins and prehistoric monuments that can be seen in Portalegre testify the human occupation long before the medieval period. The strategic position, 10 km (6 miles) from the Spain border, made this city a crucial point in Portugal’s defense during the middle age and one of the most historical acclaimed districts of Portugal. In the 16th century the village was strongly developed and it is elevated to bishop’s seat and city category, causing the settlement of several nobles and bourgeois families in the town, helping to build one of the finest sets of manor houses in the country. The 17th and 18th centuries have left in the town features of a Baroque strong character that can still be seen in some monuments.

Located in the Serra de São Mamede Natural Park, the city shares the flora and fauna that characterize the mountains. The mountain scenery is also very rich from the geological point of view where nature expresses herself in a very particular way with the impressing formations of quartzite rocks that draw attention. A closer walk through the mountain allows the observation of the diverse wildlife that has its habitat there, among which there are forty species of birds, as well as the practice of many other outdoor activities. Visit Portalegre, a city of fine wines, great gastronomy and tasty convent pastry and allow yourself to fall in love for the winding cobbled streets that will lead you in an authentic journey through time, passing by buildings of baroque inspiration, exquisite museums, fabulous examples of religious architecture and magnificent fragments of the medieval wall.