Deprecated: mysql_pconnect(): The mysql extension is deprecated and will be removed in the future: use mysqli or PDO instead in /home/portuga2/public_html/connections/config.php on line 27
 Vila Real - Portugal B'side

Trivia: From 1641 to 1941 the sword in the city’s coat of arms was with the tip facing down in a sign of disgrace and shame for the Marquises of Vila Real that embraced the cause of union with Spain during the Restoration of the Independence of Portugal. 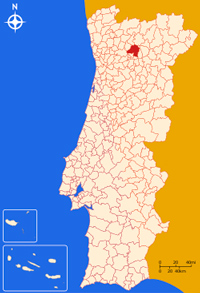 Vila Real is Trás-os-Montes provincial capital, belonging to Vila Real district, with a north border with Spain. Is located in a privileged area of ​​great natural abundance, sheltered by the magnificent Marão and Alvão mountains and the Corgo River. The Vila Real history witness architectural traces of human occupation from Paleolithic times, and other peoples like the Celtiberian, Romans, Barbarians and Muslims. The Barbarians and Muslims invasions led Vila Real to suffer a gradual depopulation, returning only to gain importance later on in the early Middle Age. In 1289, by charter conceded by King Denis, is founded the Pobra de Vila Real de Panóias, who would later become the city that Vila Real is today. Being situated between northern major roads it attracted on the 17th, 18th and 19th centuries many noble families, witnessed today by the numerous coat of arms that ennoble the facades of many buildings.

There are many charming towns and villages near Vila Real, like Peso da Régua and Sabrosa, which show off the 15th century houses and vineyards above Pinhão River. Vila Real is the ideal starting point to explore the Douro valley and follow the route of the famous Port wine. Enjoy the early autumn to visit this location and join in the grape harvest of the various farms that meet the Douro River banks. At the end don’t forget to taste some of the excellent wines of the region also known by several other regional products such as honey, cheese and local smoked meat.