Deprecated: mysql_pconnect(): The mysql extension is deprecated and will be removed in the future: use mysqli or PDO instead in /home/portuga2/public_html/connections/config.php on line 27
 Bragança - Portugal B'side

Trivia: The Church of São Vicente de Fora is part of one of the most important tragic love stories in Portugal. It is believed that was in this church, in the thirteenth century, that D. Pedro I secretly married to his forbidden love Inês de Castro 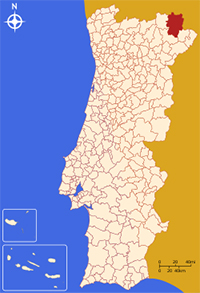 The district of Bragança, which has as its capital the city of Bragança, is located in the most northeast of Portugal, one of the most remote and forgotten regions of Portugal. However, this isolation has allowed its rich history and strong traditions, influenced by ancient civilizations who have passed by like the Celts, Romans and Arabs, to be magnificently preserved till this days. Despite being a region rich in fauna and flora, factors such as the very strict climate and its location away from important infrastructure and shopping centers led the population to suffer waves of exodus for centuries. Here ancient stone houses are grouped into small villages that seem unaffected by the complexity of modern life, where its inhabitants have a traditional way of life with a general feel of pleasing distance from the most cosmopolitan and busier parts of the country.

The city of Bragança, proudly located on a plateau only a matter of a few kilometers away from the Spanish border, was elevated to city status in 1464. The fortress that dominates the horizon, demonstrates the importance of the strategic position of this city for years, especially for military purposes and for the control of traffic routes. The XVI, XVII and XVIII centuries were years of great dynamism and urban growth, a result of the economic, political and military conjuncture, evident in the construction and remodeling of all the churches, convents and noble houses.

For its visitors, this remote and mountainous region has a lot to offer. If you want to explore a bit of history and nature away from the crowds, here you will find idyllic natural and wild sceneries, stone villages and towns steeped in history, a very rich regional cuisine and a lifestyle marked by traditions. Enjoy the spring season when the region becomes even more beautiful, when a white blanket of almond blossoms covers its undulating valleys.