Deprecated: mysql_pconnect(): The mysql extension is deprecated and will be removed in the future: use mysqli or PDO instead in /home/portuga2/public_html/connections/config.php on line 27
 Guarda - Portugal B'side

Trivia: Guarda is the highest city in Portugal, rising to 1056 meters of altitude in the northwest side of the chain of Serra da Estrela. 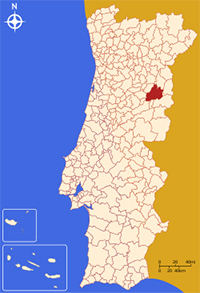 Placed in the mountainous landscape of Serra da Estrela, the city of Guarda has traces of human occupation since Prehistory. Owner of a rich and unique cultural heritage, Guarda houses in its walls more than 800 years of History and lodge one of the most admirable and best preserved built patrimonies of all the country. The location of Guarda in the vicinity of Spain and its geographical location at 1056 meters high on a rugged terrain, once made the city one of the most important in the defense of the Portuguese border against the kingdoms of Castile and Leon in the Middle Ages, witnessed by the set of fortifications. Guarda is known for the city of 5 Fs: Strong ("forte"), given the hardness of the granite that characterizes its unique landscape and the imposing defensive system that once stood, preserved today in the castle tower and its walls; Plenty ("farta"), due to the richness of the Mondego valley that shelters fertile valleys and water courses that guarantee the sustainability of those who live in the region and also the rich and varied typical gastronomy; Cold ("fria"), the proximity to the Serra da Estrela makes this region known for its stiff winters, revealing an unmatched beauty in the coldest months when covered with a beautiful snow blanket; Faithful ("fiel"), because Alvaro Gil Cabral refused to hand over the keys of the city to the King of Castile during the crisis of 1383-85; Beautiful ("formosa"), for its natural beauty and its monuments, squares, gardens and parks.

Come and visit the district of Guarda and the city that gives it its name, an unforgettable destination where historical monuments lead you to the beginnings of the nation, and visit the countless colossal castles that once defended the country. A region with much to explore, crossed by the route of the Historical Villages, the Border Castles, the Jewish Route and the Prehistory of the country.